The SoBiC System combines unique mechanisms to automatically create an optimal environment for growing plants. It utilizes natural soil and an autonomous water circulation mechanism that is powered by solar heat and the change of air pressure without any need for artificial energy like electricity or fuels. The basic system was developed in 2015. Since then, it has been put to practical use and was commercialized in form of a "single pod type" for household use in 2017.
SoBiC-PRO, the new expandable model, employs a large-sized cultivating capsule and a horizontally placed cartridge bag that enables cultivation of multiple seeds or seedlings within one unit. As long as there is sunlight and warmth, SoBiC-PRO can easily be used by anyone, anwehere, to achieve maximum agricultural production efficiency through the system’s fully automated watering system.

Place the SoBiC-PRO unit in a sunny place, connect a general water hose, insert cartridge bag containing cultivated soil, plant seeds or seedlings (3 to 4 stocks/unit if tomatoes), and watch the plants grow without any additional care. If you want to further increase harvest volumes or quality, simple things like branch support and pollination assistance, adjustment of water level and the adding of fertilizers will help. After harvesting, you can start the next crop cultivation right away by simply replacing the cartridge bag,. SoBiC does not require agricultural techniques or special knowledge, nor any troublesome procedures such as soil making, cultivation, weed control, manual watering, soil improvement, etc.
The base unit can be expanded easily and flexibly according to demand, as long as there is space. In conventional farming, large scale production requires securing vast designated farmland, as well as setting up numerous facilities and machineries. All these pose large financial risks to farmers.

For utilizing SoBiC-PRO, there no need to acquire designated farmland or setting up additional machineries. No matter how large the space, you can easily start efficient crop production even on concrete, and the system can be expanded flexibly as demand grows without shouldering any heavy investment risk.

THE UNNECESSITY OF FARMLAND ROFITS FARMERS THE MOST
No one ever focused on the most important aspects of possible measures to increase agricultural production efficiency. The foundation of agricultural production is farmland, whereas the maintenance of the farmland is one of the most costly and troublesome aspects of farming. For example, in the case of farming business in Japan, 42% of expenditures is spent on maintenance of farmland. Using super efficient fertilizer, nutrient-rich soil, or otherwise adopting high functional agricultural machinery in order to improve production efficiency, would still not significantly contribute to the overall agricultural efficiency.
Nowadays hydroponic cultivation systems that do not use farmland already exist, but they require very sophisticated facilities, are very expensive to set up and maintain and require highly skilled facility operators and proper management. Furthermore, the types of crops that can be produced by hydroponic cultivation systems are very limited, and its most well-suited leafy vegetables cannot contribute to the overall food demand at all.
With SoBiC, farmland is unnecessary and heavy facilities and engnirees are not required either. Regardless of the size of the space, the production efficiency is the best due to free energy system for the automatic watering cycle harmonizing law of nature, and unnecessity for weeding.

BOOST AGARICULTURE PRODUCTION EFFICIENCY BY 10 TIMES
SoBiC can not only cut off the all heavy expenditures regarding farmland and reduce other cost factors such as fertilizers, chemicals, energy and machinery but also expand production sacle easily and increase chance of the harvest by easy replacement of the carglidge bag as well.
SoBiC does not waste water at all due to its complete water cycle system. SoBiC saves over 90% of water in comparison to conventional cultivating methods. It means enabling 10 times the production with same quantity of water, and it can bring great benefits to countries where water supply is limited.
In addition, SoBiC is making optimal growth environment by“power of nature”based on “law of nature”and it should be safe to say that the crops cultivated by SoBiC is “ultimate organic crops”. Ordinary organic crops are expensive due to the inefficiency of the production, however, SoBiC can produce organic crops in a highly efficient manner and at a lower running costs than producing regular crops.
Subsequently, utilizing SoBiC can boost farming efficiency by more than 10 times compared to conventional methods of agricultural crop production. (Refer to below“List of Improvements through SoBiC.)
LIBERALIZATION OF AGRICULTURE
SoBiC-PRO is a system that leads to the release from various difficulties and burdens related to agricultural production. By using SoBiC, anyone, anywhere, regardless of scale, can easily grow crops. The system does not use electricity or fuel, it minimizes water consumption and creates the chain reaction of human’s affluence without destroying nature.

<< Balance between economic recovery and environmental improvement >>
In recent years, the economic development through the evolution of industrial technology has reached its limits, and the creation of a new growth industry from the primary level such as agriculture became necessary. SoBiC, can easily lead the development of new agricultural styles like urban agriculture. The more SoBiC spreads, the stronger the urban greening progress, the stronger the industrial activity progress.

<< Reduction of welfare burden>>
SoBiC does not require heavy labor and technology, but can provide healthy and highly productive work for elderly people and people with disabilities.

<< Ensuring food safety and stable supply >>
In recent years, the awareness of food safety has risen. The demand for organic food in Europe and the United States is increasing year by year. However, organic crops are high in price because their production efficiency is low. By utilizing SoBiC, consumers can be given a new reasonable choice to get healthy food at low cost.

<< Avoid agricultural risks due to climate change >>
Due to climate change such as global warming, there is a tendency that rain does not fall sufficiently in agricultural areas, while urban areas experience very heavy rainfall. This means that the global water circulation system is changing remarkably and farmland is narrowing rapidly, increasing risks for famers. SoBiC can cut off these risks and solve such serious problems fundamentally.

<< As a fundamental solution to the global food crisis >>
The current world population of 7.3 billion is expected to increase by more than 10 billion people in the next 30 years. Contrary to that, environmental worsening continues due to global warming and pollution, the balance of the ecosystem collapses, energy and water resources are overwhelmingly lacking, and it is said that a serious food crisis will come within 20 years. SoBiC can be the most drastic and easy solution for these critical issues.

COOPRATION WITH EXISTING INDUSTRY IS A CHALLENGE
In recent years, trends to introduce high-tech solutions, such as A.I. and IoT into agriculture have become active. The industry in some areas has become more sophisticated, but also more complicated, through various endeavors to combine agricultural technology with other fields in order to make it more efficient. However, these systems tend to be too expensive to pay for businesses. On the other hand, SoBiC utilizes a very simple principle based on the natural science, and offers a reasonable method to improve efficiency on both small and large scale. Cooperation with hi-tech companies or existing large scale farmers is difficult at present due to many conflicting aspects of interest. However, it is obvious that the price of crops is rising due to recent abnormal weather conditions, and it already close to the limit in efficiency in existing agricultural methods, and SoBiC will be surely forcusd as one of easy and effective solutions soon or later regardless of the present technology trends.

PRODUCT OVER VIEW
The basic kit as the standard model will be sold for household use (General retail price for home use: JP￥19,800). For user who wish to increase harvest, extension units will be available as option (General retail price for home use: JP￥15,800). As for business use, there are many options to set up systems with various configurations depending on the installation environment and the type of crop or the scale of production. Prices will be offered at most reasonable levels for the respective purpose with a minimum order lot of100 units. For example, if a customer can prepare a simple waterway channel by themselves, it is possible to install only SoBiC circulating pump units at arbitrary intervals and at with such pattern the setup cost can be around JP￥3,500 / m2. The prices can be even lower based on quantity. 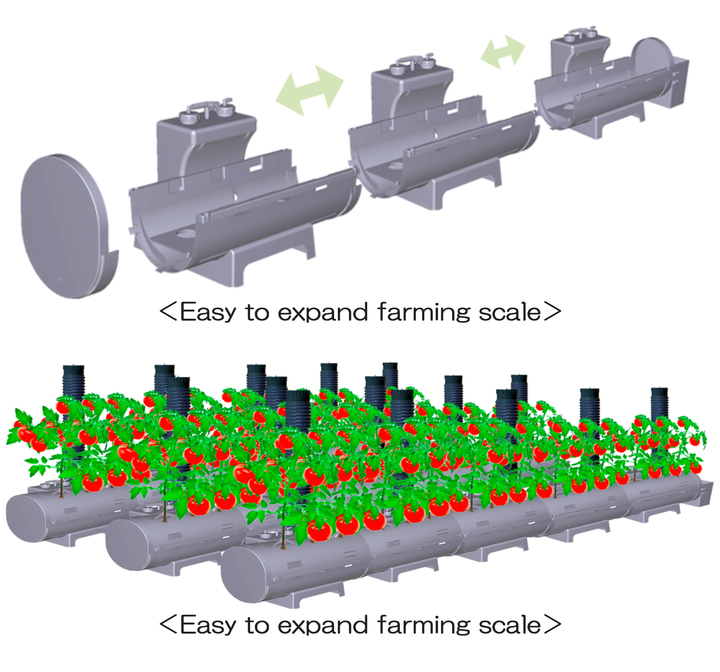 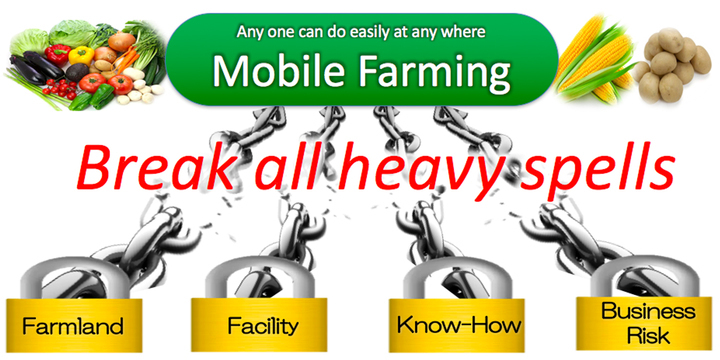