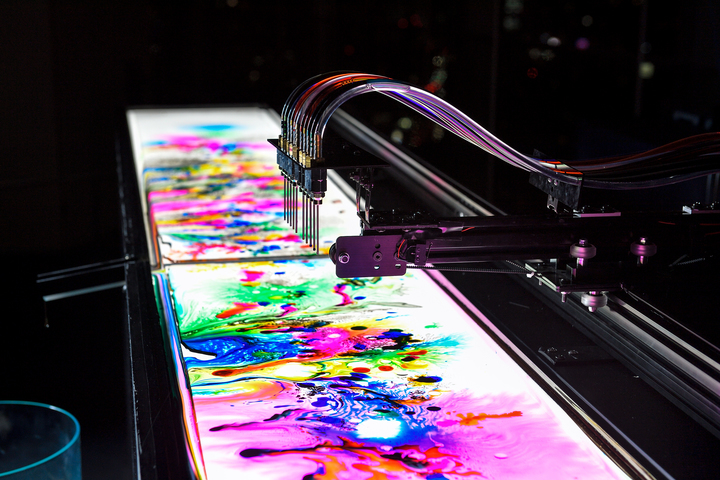 ■Abstract
An installation work that constantly creates organic patterns through digitally controlled physical phenomenon arose by mixture of water, ink and chemical substances. Systematic digital control and unpredictable natural phenomenon create patterns that blend together and eventually turn to black, an insipid, lifeless state, reminding us of the diversity and cycle of life.

The Installation that constantly creates organic patterns through digitally controlled physical phenomena produced by mixture of water, ink and chemical substances. Systematic digital control and unpredictable natural phenomenon create various patterns that dye together and eventually turn to black, an insipid, lifeless state, reminding us of the diversity and cycle of life.

Dropping unit moves to the position determined by the Game of Life algorithm of main computer, and then drops inks to pallet filled with an aqueous solution of sodium polyacrylate.
The Game of Life progresses gradually at every drop, and the next position is automatically calculated. Repeating this sequence continues to drop ink Autonomously.
Mixture of ink dropped on the pallet forms the intricate patterns by causing various reactions.
When the dropping amount exceeds the allowable amount of pallet, the excesses flow out to the waste liquid unit. Waste liquids which produced by mixing the various inks are accumulated as a black liquid.

■System Configuration
Whole appearance is designed so as to recall the ”Birth, Dye, and Death” which dyebirth expresses. Ink tank and dropping unit express the metaphor of life-producing system with the dynamically arrangement of ink tank and tubes come from the tank in a row. Pallet where the inks are intricately mixed and waste liquid unit where the mixed inks goes black and dead are the center part of dyebirth makes feel the beauty and fragility of life, and are shone a light to stand out. Use of black housing and parts enhances the presence of three elements of dyebirth.

phenomenon this time. No conclusion why the ink spreads widely or whether Saffman-Taylor instability affects the mechanism of dendritic pattern formation has been reached yet.

■ Marangoni Effect
When the alcohol solution is dropped on the oil-based ink, the ink expands and move lambently. This physical phenomenon is called “Marangoni Effect”. Marangoni Effect is generally observed when the surface tension is heterogeneous on a surface, i.e., a part with larger surface tension pulls the liquid more strongly than the other part. Resultant convection is called “Marangoni convection”. This phenomenon was discovered in 1865 by C. Marangoni 注2 The convection usually observed in japanese miso soup is one example of Marangoni convection. In this case, the surface tension becomes heterogeneous by the temperature gradient. Repelling of oil by detergent, sometimes seen in TV commercial, and the movement of wine at a surface of a glass (tears of wine) are also caused by the Marangoni effect. Recently, some researchers are pointing the possibility that some cells effectively move utilizing the Marangoni effect.
In “dyebirth”, surface tension of the oil-based ink at the contact area with lotion is larger than the area with alcohol, and the ink is pulled by the stronger surface tension. Not only the simple expansion but also more complicated motion or flow is sometimes observed due to fluctuation in the system.


When the aqueous solution containing alcohol is dropped on the oil-based ink, the ink spontaneously moves and spreads out. This is due to the phenomenon called “Marangoni Effect”. Marangoni effect is the generation of convection due to the imbalance of the surface tension in each location. This is called “Marangoni convection”. This phenomenon was discovered in 1865 by C. Marangoni (*Note 2). For example, the convection observed in miso soup is a type of Marangoni convection. In this case, a flow is generated by the difference in surface tension due to the temperature gradient. Besides that, there are phenomena of Marangoni effect such as repellency of oil by dish detergent (as seen on TV commercial), movement of alcohol on the side of glass (Tears of Wine), etc. Recently, some researchers are pointing out the possibility that the single cell organisms move in water with Marangoni effect.
In “dyebirth” system, surface tension of the oil-based ink at the area directly contacting the lotion is higher than that at the area contacting the alcohol; thus the ink spreads out by being pulled with the tension. Various movements of inks are observed by little differences in balance.

■Result/Conclusion
In this artwork, we have constructed an autonomous system using reaction of physical phenomena which are difficult to predict. A complicated environment constructed by fluids continuously changes and represents various colors and patterns that are difficult to digitally reproduce. We fell that the creating state by intertwining various elements in a complex way is a life. Also, the diversity and constantly changing environment seems like a common term with an autonomous system of life.

In addition, dyebirth was created through extensive experiments and prototyping in cooperation with Dr. Mafumi Hishida, Department of Chemistry, University of Tsukuba.
We conducted experiments on various natural phenomena and deeply discussed how to sublimate as an expression. There are many phen

'nor' is a creative label initiated by Japanese artists whose have different background.Our label consists of architects, designers, musicians, engineers, and so on.We create installations and products using with hardware and software integration.The purpose is trying to understand undefined area and create new value through this approach. 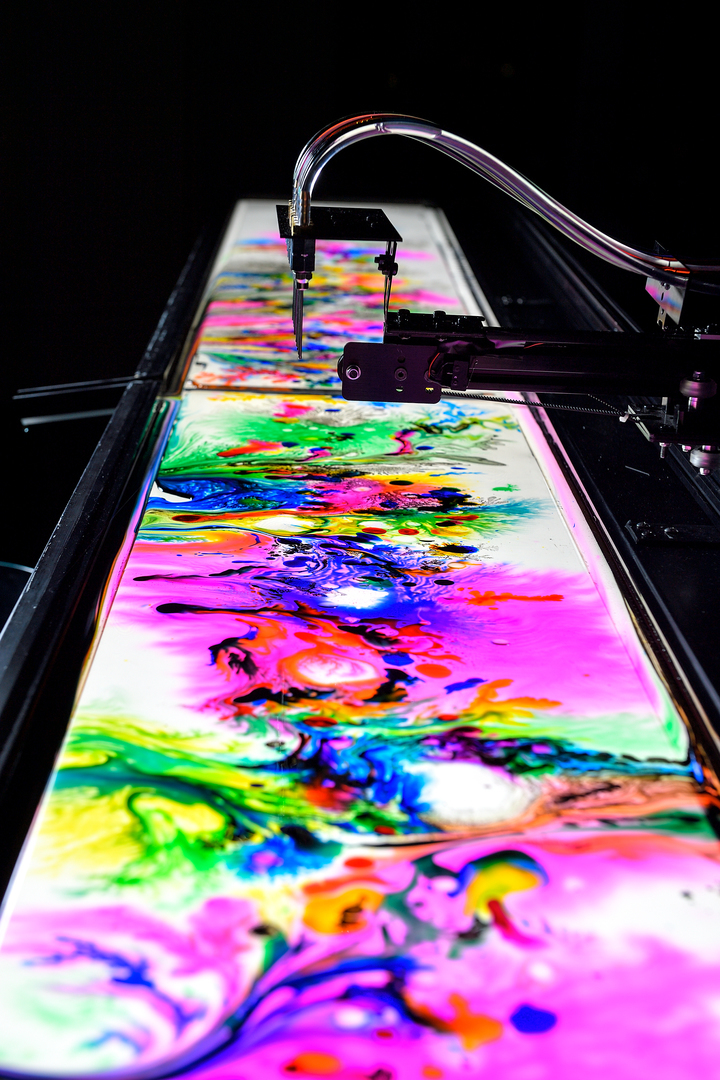 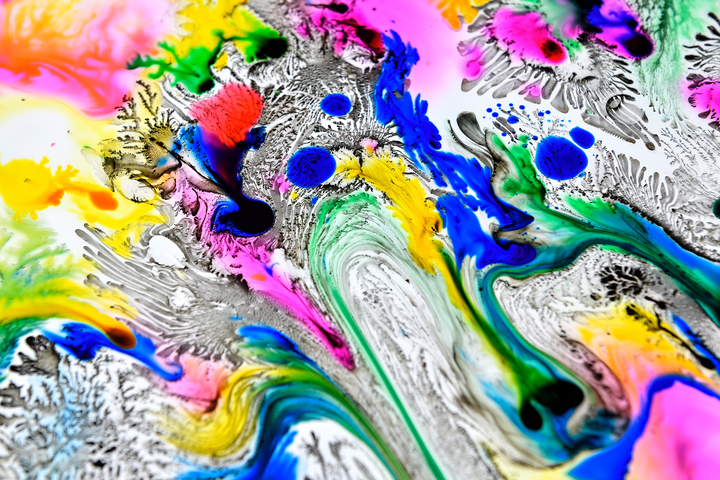 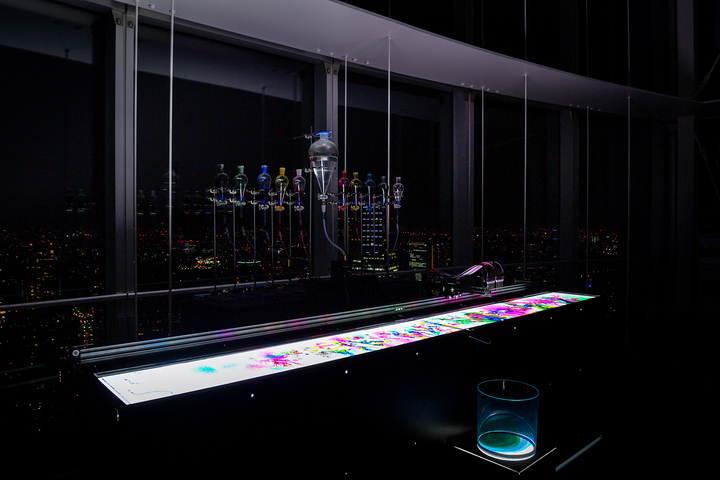 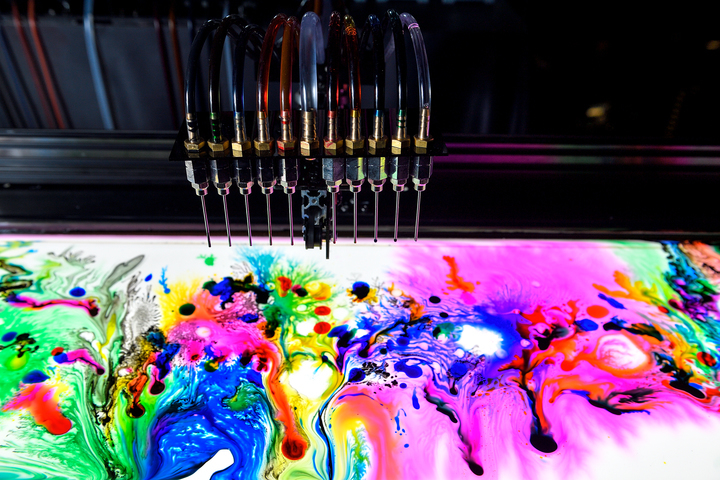 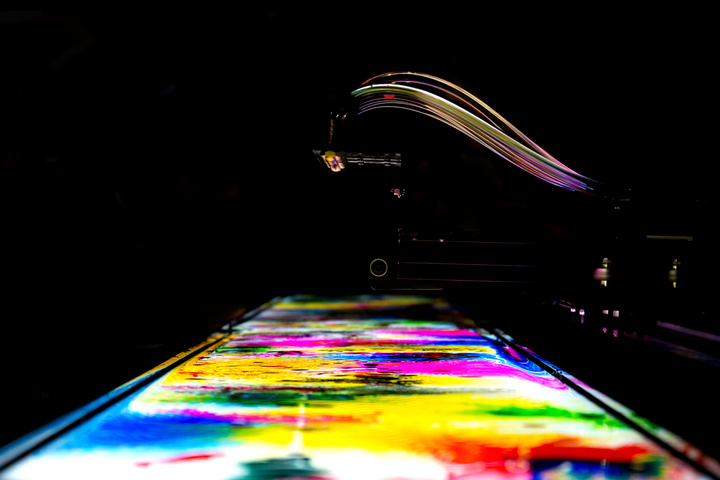 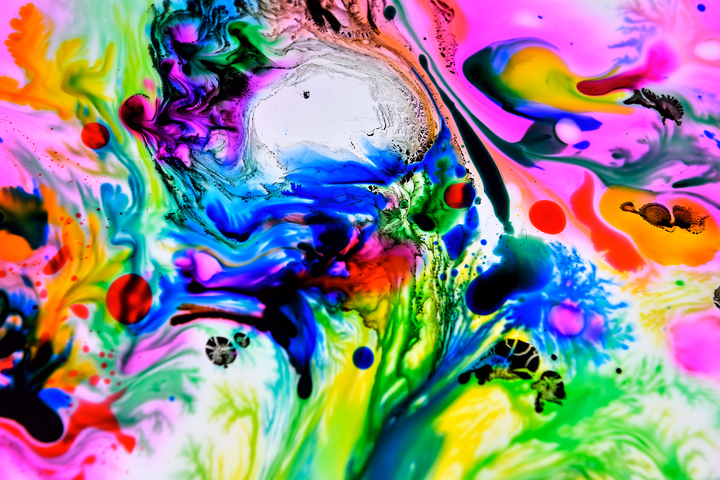 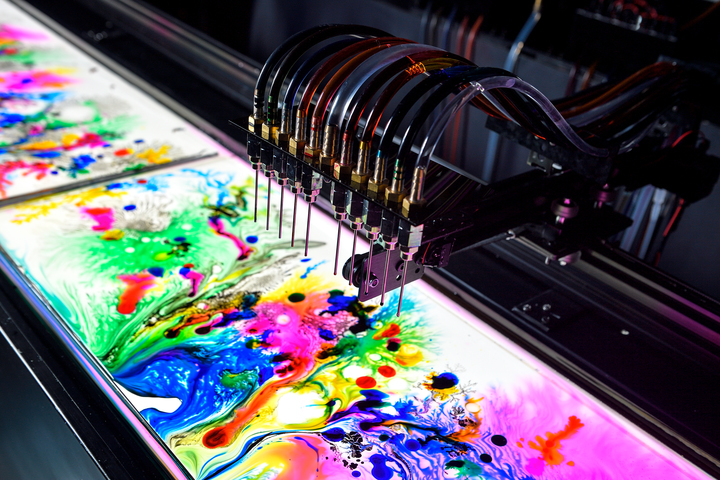 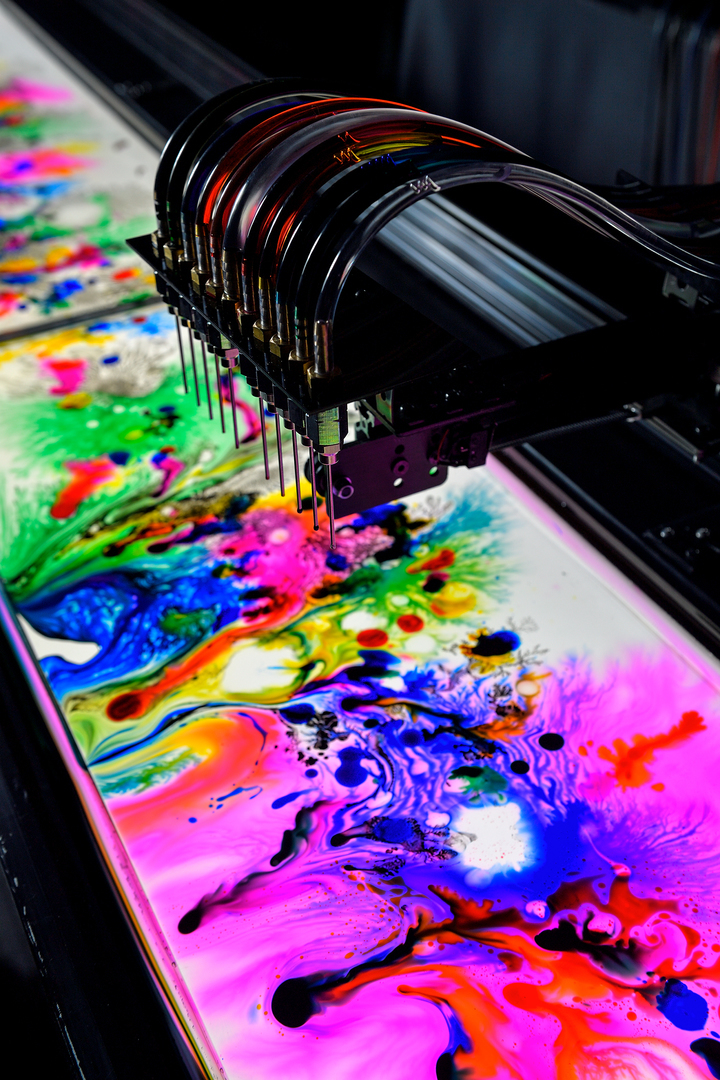