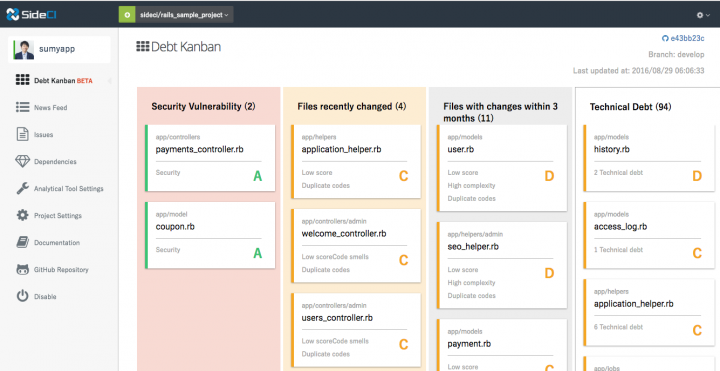 To this day, we have provided automation of code reviews on multiple languages including Ruby, PHP, Python, Go, etc., and added functions for several languages such as auto-correction of the indicated content of the reviews.

The newly added "Debt Kanban" analyses past codes and visualizes its quality. The quality is scored according to its impact on productivity. For instance, when there is a file where codes are frequently added or modified, and the codes are very complex or difficult to read, the return on investment by refactoring that file is considered to be high, and will be displayed with high priority on the "Debt Kanban".

Despite the importance of refactoring being well known amongst engineers, not knowing where to start was addressed as a problem. The "Debt Kanban" feature aims to encourage improvement and contribute to the promotion of productivity of software development by visualizing overall quality and proposing where to start refactoring to be most efficient.

The present "Debt Kanban" is provided on projects developed with Ruby as an experimental feature. In the future, we plan to extend this feature to other programming languages(PHP, Javascript, Python, Go, Java, Scala, Swift, etc.) accordingly. Also, we will make improvements such as better accuracy of quality analysis and adding features to make refactoring easier, to continue our efforts in contributing to the promotion of engineers' productivity.

* About "SideCI"
SideCI is a code review support service which automates code reviews on GitHub. By analyzing the source codes and indicating issues in place of engineers, this service reduces the time spent on reviewing codes as well as contributing to the promotion of software quality. Being published on GitHub Integrations and increasing overseas user ratio, it continues to expand as a service for engineers, started from Japan.
https://sideci.com
https://github.com/integrations/sideci 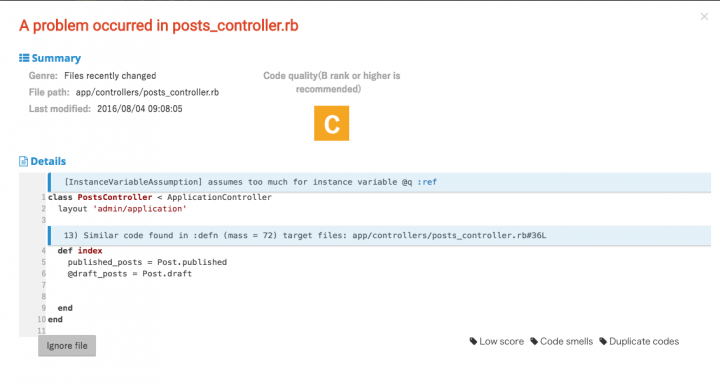